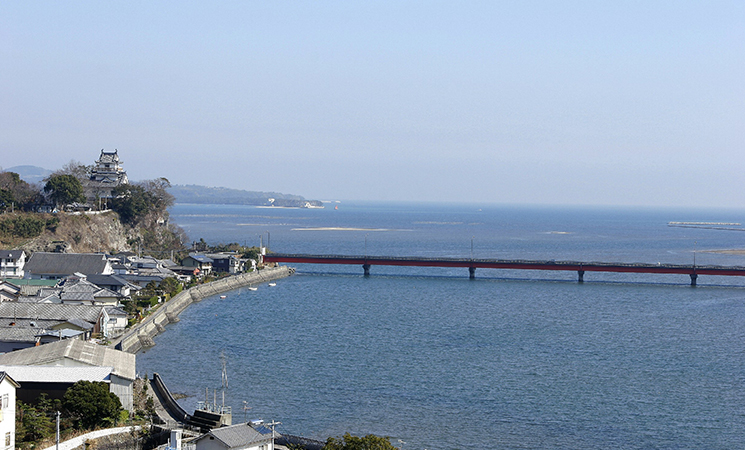 During the Nara (710-784) and Heian (794-1191) periods Kitsuki was a part of the Hayami-gun and Kunisaki-gun districts in the eight Bungo counties and later became the center of the Kunisaki Peninsula.
Daimyo (feudal lord) "OTOMO Chikahide" sent one of his sons to the area in 1250 and he started (set up) Kizuki family. The fourth daimyo "KIZUKI Yorinao", built Kitsuki Castle in 1394 during the Muromachi period (1338-1573).
Kitsuki prospered as a castle town with 32,000 fiefs of the Kitsuki feudal clan Matsudaira. It was the main place of politics and economy in Kunisaki Peninsula in the Edo period (1603-1868).
After the Meiji period, and the beginning of the modernization of Japan, the former Kitsuki City and Ota village merged and became Kitsuki City, and the former Yamaga-machi was divided into Hiji town and Hita City.
The change was repeated in the passage of time, and the former Kitsuki City, Yamaga-machi in Hayami-gun and Ota village in Nishikunisaki-gun merged in 2005 into the expanded city of Kitsuki. 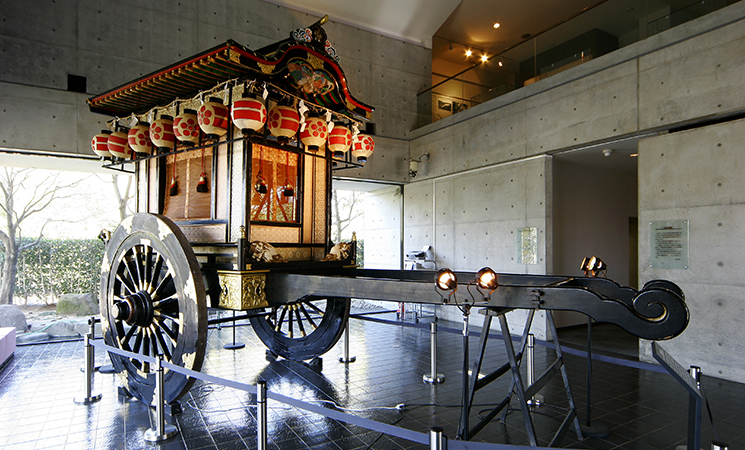 
■ Regular holiday
If it falls on a national holiday, the next weekday is closed. 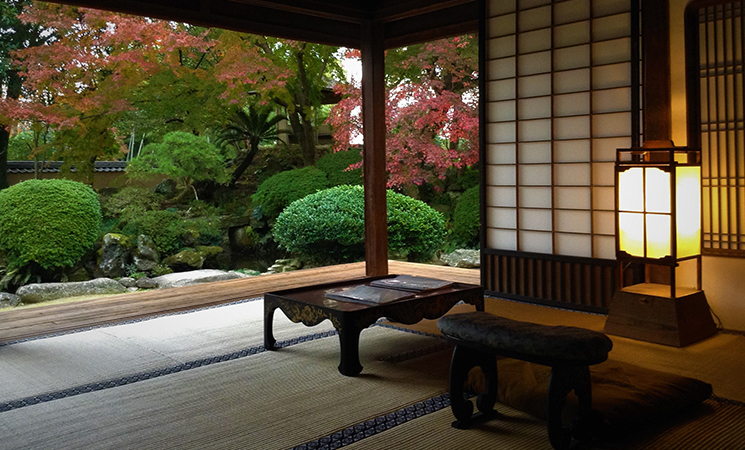 Kitsuki is an uneven castle town with samurai residences on plateaus to the north and south moreover the commercial district is sandwiched in the valley between them. This is a very rare shape for castle towns in the country, and it is considered as the only “sandwich-shaped castle town” in Japan. You can see the town’s beautiful shape from Shioya-no-saka Slope. It is a popular photo spot, and it often appears on television.

The Best Town for wearing Kimono 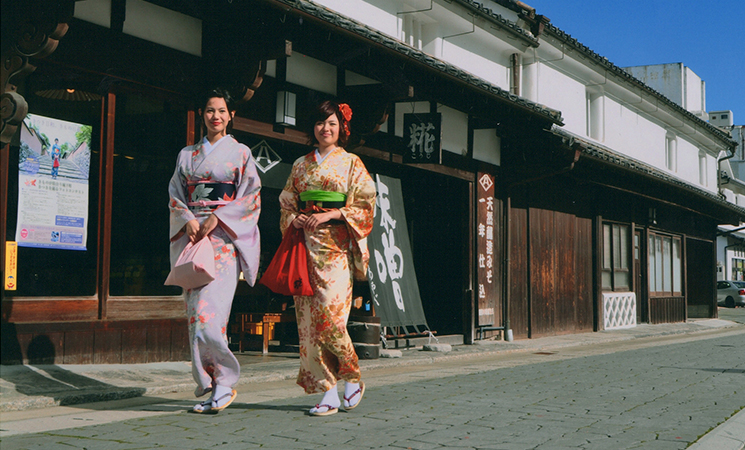 Kitsuki castle town retains well-preserved atmosphere of the Edo period, and was the first town in Japan certified as a “historic townscape where you are immersed in experience while wearing kimono.” Admission will be free of charge for entering the facilities such as Kitsuki Castle, etc. for those wearing kimono. You may also receive discount at 30 different locations including restaurants, etc.
Kitsuki is considered as “little Kyoto,” and the town presents the Japanese kimono culture to the world with the intent of becoming a town where kimonos look right at home second only to Kyoto.
"Kimono Thanksgiving Festival" is held on the third Saturday every month and it is full of special offering for people who wear kimono. Renting and dressing of kimono is performed in Warakuan. Why not take a walk in Kitsuki wearing kimono? 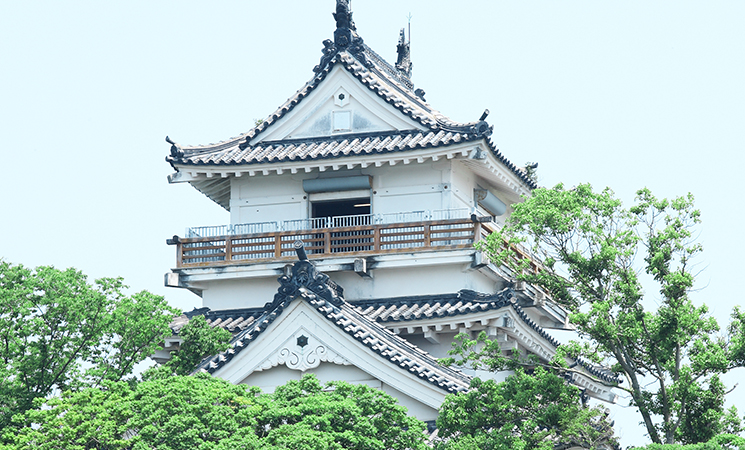 Kitsuki Castle is said to be the smallest castle in Japan, and the highlight is the view of the sea from the castle tower. Suits of armor, helmets, and swords used by samurai are on display inside the castle. Take a commemorative photo dressed as a warrior in a real suit of armor and helmet. 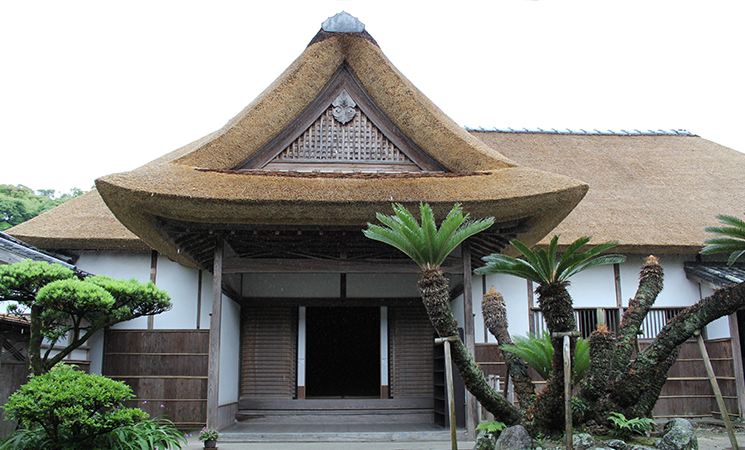 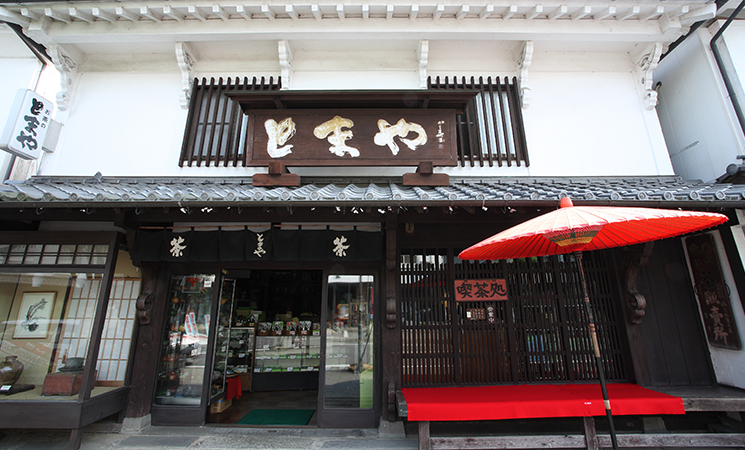 Kitsuki was outstanding merchant town in the Edo period.
The Merchants in kitsuki were kind and polite. Therefore, shoppers came from a distance.
The commercial area is from Tanimachi to Shinmachi. This district is located between the north and south plateaus.
As a symbolic building in this district are Ayabe miso shop, Tomaya tea-leaves shop and Manrikiya geta and wood works shop (Geta is a Japanese wooden clogs). There are rows of temples in Teramachi.
These temples served as a stronghold for the western part of the castle town. Temples were used as a place for samurai to gather at the time of war.
Japanese Rock garden at Chosho-ji Temple and Japan's largest iron statue of Buddha at Shoukaku-ji Temple are famous.

Various events and festivals are held throughout the year.

Spring (March to May) 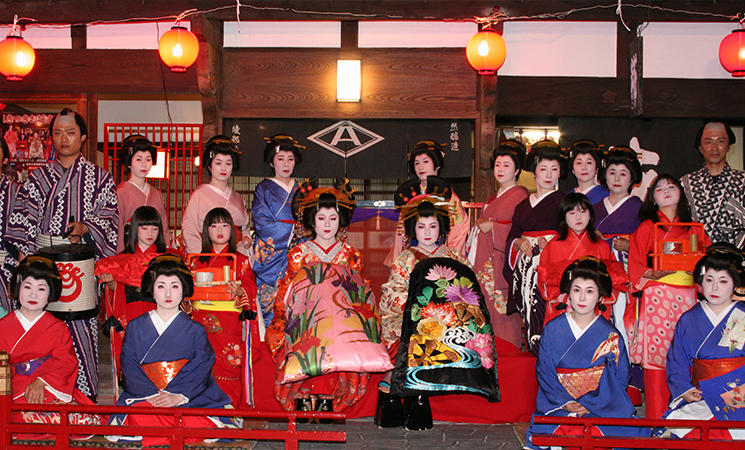 "Kitsuki Castle Festival" are familiar with people as a folklore spring festival. The northern and southern plateau are crowded with spectators, watching the procession dressed in the Edo period, and it feels like a time-slip to the Edo period. There are a lot of attractions such as a feudal lord's procession, the procession of courtesans parade and performance of Japanese drums. 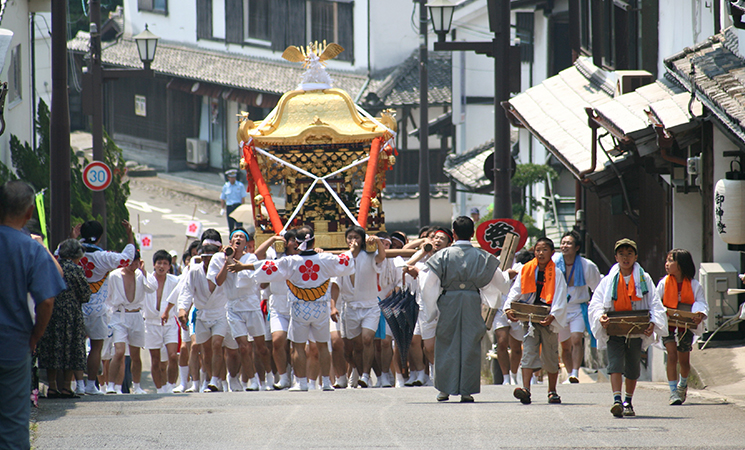 A lot of people come for swimming in the sea and watching fireworks in summer. In addition, the Tenjin Festival is held in the old castle town for two days and there is a parade of floats from each town and ancient-style court carriages along the street. It climaxes with "a quarrel" when the floats finally crash into each other. 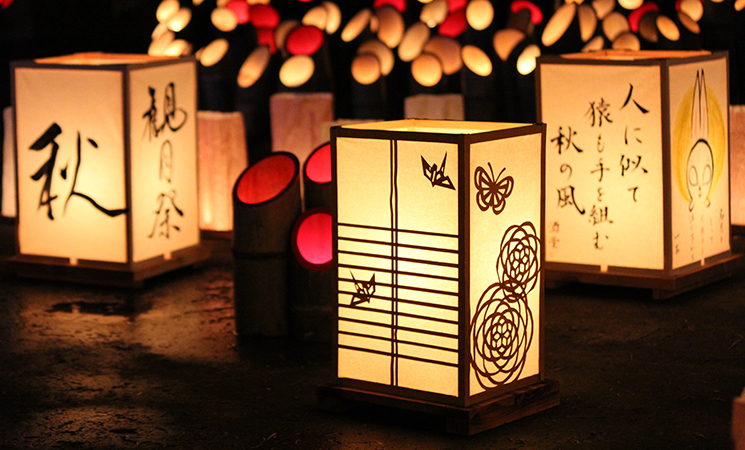 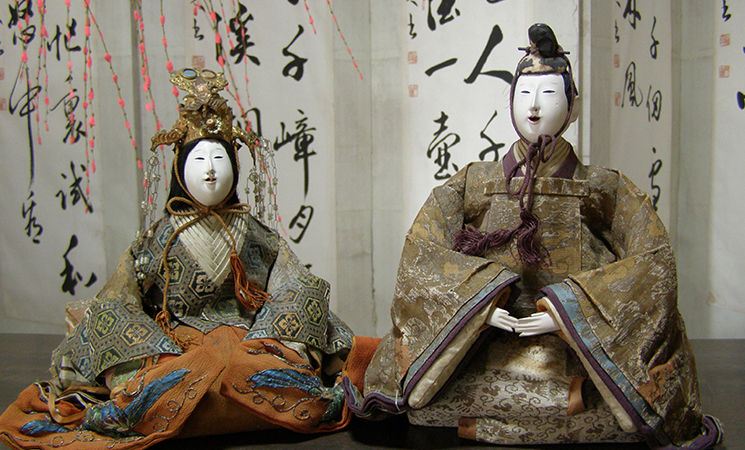 In winter, Doll's Festival is held and "the ancient dolls in Edo priod", related to the feudal lord Matsudaira is exhibited in the Kitsuki Castle Town Historical Museum.
Also you can enjoy the ancient dolls handed down to the samurai families and the merchant families from the Edo period throughout castle town Kitsuki.