Kitsuki is located in the north-eastern part of Oita prefecture and forms the southern part of the Kunisaki Peninsula. Kituski covers 280 km2 (approximately 23 km north to south and 29 km east to west), which is 4.4% of the prefecture (6,339 km2). Kitsuki has a population of approximately 32,000 people. The city tree is the Bungo Plum and the city flower is the Calanthe discolor.

The topography is full of ups and downs from the seaside facing Beppu Bay to the surrounding mountains. Kitsuki is not only located near Oita airport but also the major cities of Beppu and Oita, the capital city of Oita prefecture. Kitsuki is also a strategic connecting point of three major roads: the Oita Airport road, the Usa-Beppu road and the Oita Expressway. 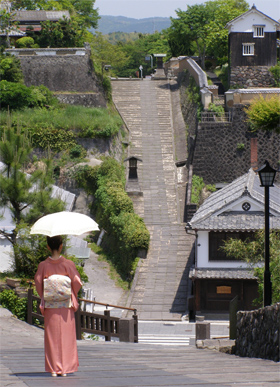 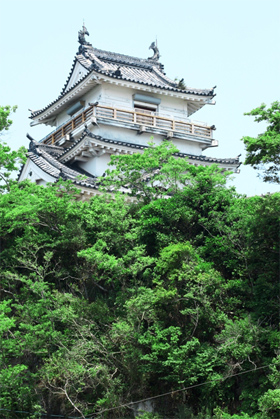 During the Nara (710-784) and Heian (794-1191) eras it was part of the Hayami-gun and Kunisaki-gun districts in the eight Bungo counties and later became the home of the Usa Shrine.

Daimyo (feudal lord) Otomo came to the area in the Kamakura era (1192-1336) and changed the family name to Kizuki. The fourth daimyo, Kizuki Yorinao, constructed Kitsuki Castle in 1394 during the Muromachi era (1338-1573).

Kitsuki prospered as a castle town with 32,000 fiefs of the Kitsuki feudal clan Matsudaira. It was the main place of politics and economy in Kunisaki Peninsula in the Edo era (1603-1868) until the abolition of feudal domains and establishment of prefectures.

After the Meiji era, and the beginning of the modernisation of Japan, the former Kitsuki city and Ota village became Kitsuki prefecture, and the former Yamaga-machi was divided between Hiji prefecture and Hita prefecture.

The change was repeated in the passage of time, and the former Kitsuki city, Yamaga-machi in Hayami-gun and Ota village in Nishikunisaki-gun were merged in 2005 into the expanded city of Kitsuki. 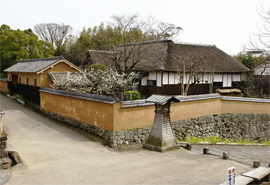 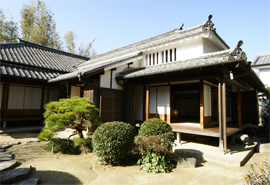 The historic old samurai residence of Kato Yogoemon was used as a rest place for the feudal lord in the Edo era. Now, there is the Kurihara Katsumi Museum in the garden, which exhibits works such as Suiboku-ga (ink painting). 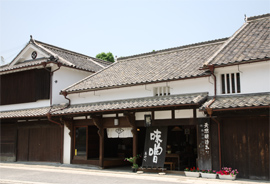 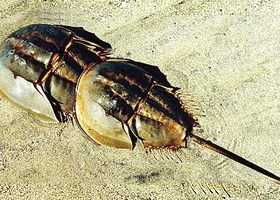 The south-eastern part of Kitsuki beside Beppu Bay in the south and the Iyo-nada Sea in the east has the beautiful seashore for a view.

Mountains sweep away from Futago-san in the north and Kumogadake in the west, and 200 m～600 m high mountains surround the north-western part.

Kitsuki has a Seto Inland Sea-style warm climate, with an annual average temperature of around 16 degrees and annual average rainfall of approximately 130 cm. There is little snow. 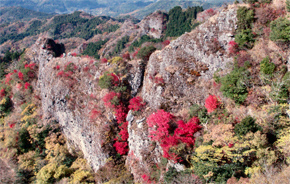 Nature watching is held in spring and autumn, and you can enjoy the delights of nature in all four seasons. 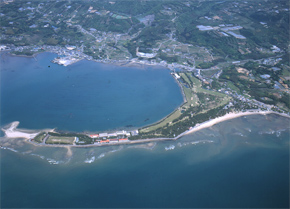 There is the beautiful Nata beach, chosen as one of Japan's 100 Best Beaches, which is known for its white sand and blue pines, and is also one of Japan’s 100 Best Beaches for Swimming. The beach, which spreads north to south over 2 km, is the best beach for swimming in East Kyushu and is full of swimmers during the summer. 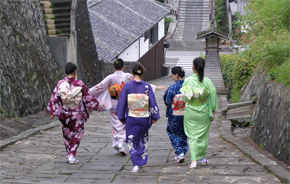 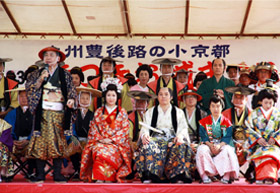 There is gathering of clams on the beach and a Calanthe (flower) festival in the mountains. "Kitsuki Castle Festival" is familiar with people as a civil spring festival. Kitadai-bukeyashiki and Minamidai-bukeyashiki are crowded with people putting on clothes of the Edo era, and it feels like a time-slip into Edo times. There are a lot of attractions such as a feudal lord's procession, an oiran (geisha) parade and playing of Japanese drums. 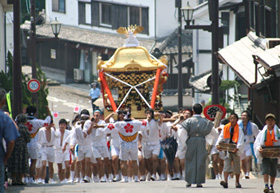 A lot of people come for swimming and fireworks in summer. In addition, the Tenjin Festival is held in the old castle town for two days and there is a parade of floats from each town and ancient-style court carriages along the street. It climaxes with "a quarrel" when the floats finally crash into each other. 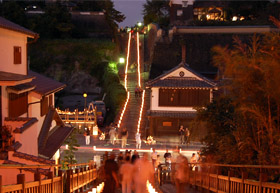 There is a Castle Town Health Walk Rally and Doburoku (raw sake) Festival in autumn. During the Moon-Viewing Festival, the old castle town is faintly lit with not only the moonlight, but also a lot of square paper lanterns and bamboo lanterns lining the streets, and it leads people to the mysterious world. 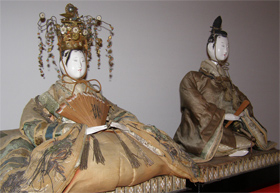 In winter, the Dolls Watching Festival is held and "an ancient and modern doll in Edo era" related to the feudal lord Matsudaira is exhibited in Kitsuki Castle Town Museum. You can enjoy various types of dolls in Sanos of the clan doctor, Ohara-tei (a senior retainer residence), Isoya-tei (a rest place for the feudal lord), Kitsuki Castle and so on.

There are a lot of specialty products in Kitsuki. The most well-known are "Tai-chazuke Ureshino", slices of sea bream with sesame soy source on rice with hot green tea poured on it, and "Kitsuki Mandarin Orange", a harmonized sweet and sour taste of the warm climate and rich fishery products from Bungo Channel. In addition, you can enjoy the rich taste and fragrance of Kitsuki Green Tea and Kitsuki English-style Tea that are well known even in other cities. 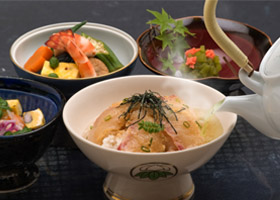 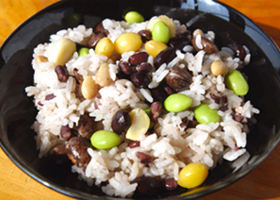 You can thoroughly enjoy dishes made with local foods in roadside stores, such as the Hurusato-chaya Yume nobori in Yokodake Nature Park. Particularly "Otakara-meshi", rice cooked with five kinds of beans (soybeans, black soybeans, green soybeans, adzuki beans and pinto beans), chestnuts and ginkgos, called "a success meal in life" or "a jewel box with beans", and it is a specialty dish in Kitsuki.